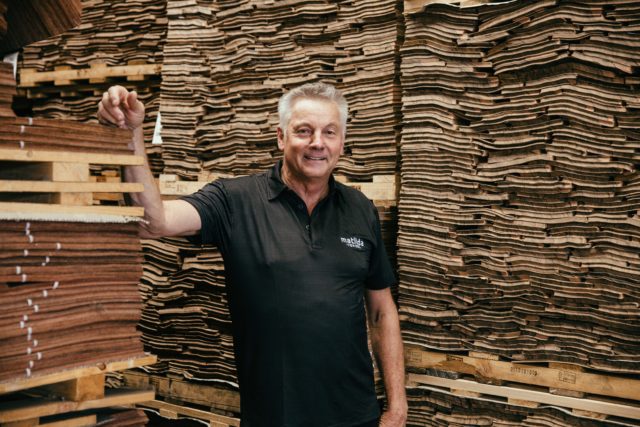 Robert hands over the reigns

This month, we are fare-welling our founder, our patriarch, a stalwart of the timber industry – Robert Filip – as he boldly moves into retirement.

Robert’s true vocation is to work with timber. He has worked in the industry his entire life. From the humble beginning of sweeping the floor as a young boy at the Hancock Brother Sawmill in Cairns, to becoming production manager at the very same place some ten years later, to the proud of owner of his own business, Matilda Veneer.

To separate the story of Matilda Veneer from Robert’s career is not possible.  As founder and owner, Robert’s passion for the business has been absolute from the very beginning. His passion for decorative veneer pushed him to move to South East Queensland around 30 years ago to start Matilda Veneer, with machinery for veneer production bought from Hancock Brothers. He later sold this machinery and, over time, saw the potential for innovation, increased quality and export opportunities by exploring possibilities in veneer manufacturing abroad, particularly in China.

Matilda Veneer started as a small family business with Robert at the helm, ably assisted by wife Meryl, and through the early years went from strength to strength. In more recent times, Robert’s two sons-in-law joined him, first Anthony 10 years ago, then Craig three years later. This has seen further development and pushed Matilda beyond the realms of a little family business. Robert has taken pride in teaching Anthony and Craig the ins and outs of veneer and plywood production, instilling in them a passion and love for all things timber.

After exploring opportunities abroad, Robert worked hard to set high standard procedures and practices at one particular mill in China who boasted the highest quality machinery in South-East Asia. This machinery was perfected equipped to handle the potentially problematic Australian hardwoods for which Matilda had become famous for – so it appeared a winning partnership.

The only issue in this partnership was one of control. Robert has always maintained a desire to manufacture veneer of the highest quality, but the Chinese mill were more volume focused and this had the potential to impact quality. So, when the opportunity arose to purchase the now, Matilda Veneer factory, he took it with both hands, effectively realising his long-held dream of producing his own quality product, in the volumes his clients demanded.

Fast forward to today, and Robert finds himself with four grandchildren, some serious fishing and gardening to tend to, a high-quality mill set up, and two capable and passionate sons-in-law motivated to take the business to the next level. Robert has never felt more confident about passing the baton to the next generation.

To those of you who have come to know and appreciate Robert’s approach, rest assured, he will still assist with production of our veneers for some time and will also continue to provide advice and assistance on a range of business issues.  We know that Matilda Veneer is so special because of Robert’s personal approach and all of us here at Matilda Veneer are determined to replicate that approach with our own personal touch.