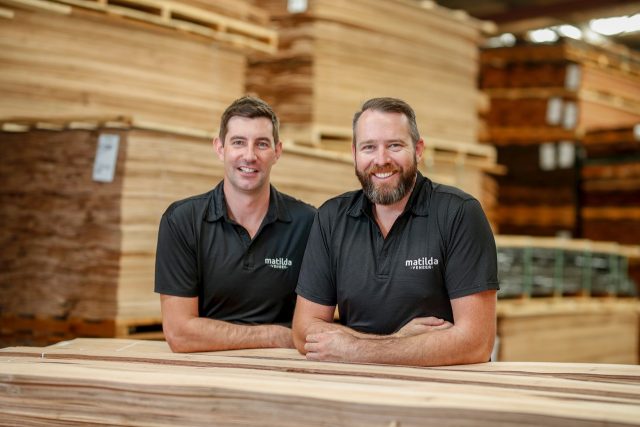 Plying their trade around the country

Plying their trade around the country

GOLD Coast family-run firm Matilda Veneer has covered some of the finest buildings in Queensland and Australia with its natural timber products.

The Molendinar-based company, founded in 1990 by Robert and Meryl Filip, counts Sydney Opera House, The Kitchens at Robina Town Centre, Bunjil Place and the new visitor centre at Phillip Island, both in Victoria, as well as the Trinity College Gateway Building at the University of Melbourne among its projects.

It manufactures or slices veneer from timber logs at a massive 10,000sq m facility just outside of Shanghai.

The veneer is then shipped back to the Gold Coast where it is graded and supplied to companies all over the country.

Matilda Veneer processes 1200 cubic metres of logs into veneer per year in Australia and between 1800 and 2000 cubic metres of plywood per year. It stores 1.4 million square metres from more than 100 species, including walnut, silky oak and Tasmanian blackwood, at its Molendinar base.

Mr Filip founded the company after Boral took over the Hancocks Timber Mill in North Ipswich in the early 1990s.

Co-manager Anthony Wardrop, who joined the company in 2007, and is married to Mr Filip’s daughter Kelly, said Mr Filip decided to found the company after Boral took over the Hancocks Timber Mill in North Ipswich where he was working in the early 1990s.

“Boral did not want the veneer section so he did a deal at the time to work out of there for one year and keep people employed there,” he said.

“And that is how Matilda Veneer started.”

Mr Filip moved to the Gold Coast by the mid-1990 s and the company has been based on the Glitter Strip ever since.

Mr Wardrop, an ex-professional volleyball player, came to Matilda Veneer after meeting his future wife through his involvement in volleyball.

He later came to a crossroads in his life where he had to choose whether to pursue volleyball or stay on the Gold Coast and work in the company.

He chose the latter and it was a similar situation for his future brotherin-law Craig Graham, another former professional volleyball player who is married to Michelle Graham (nee Filip). He was working as a teacher at St Hilda’s when he was approached by Mr Wardrop and Mr Filip in 2010 and asked to join the business.

“I knew Anthony from playing volleyball , we played in the Australian junior team together,” Mr Graham said.

“I grew up in Melbourne, he grew up in Bundaberg and later moved to the Gold Coast.

“I came for a bit of a sea change and he said he had met a girl who had a sister . I started dating the sister and so now we are brothers-in-law and we met as 14-year-olds being 3000km apart. We now run the place together.”

Mr Wardrop said they have both developed a passion for the industry over the past nine to 12 years.

“We like doing everything natural because that is where the real true beauty of timber is at,” he said.

“Essentially what we sell is the slices of veneer bundled together and then our clients will go to a panel layer who will join the veneer on its edge and then it is pressed onto a substrate like MDF or plywood. That makes it a usable product for a cabinet maker.”

Mr Wardrop cites the Bunjil Place project, situated outside of Melbourne and including an 880-seat theatre, as one of the company’s finest projects.

“It is a beautiful project. That was completed in the middle of last year,” Mr Wardrop said.

“The cool thing is one log went into that whole project. We had 5000sq m of veneer.”

The company is also contributing 1000 sheets of veneer to the visitor centre project at Phillip Island.

The pair say they are focused on building the company up as legacy for their families.

“For us it is about our three families ,” Mr Graham, who is co-manager with Mr Wardrop and runs the plywood side of the business, said.

“In time I have two girls and Anthony has two boys, there is the potential and opportunity for them to join hopefully later.

“We say the first generation of Rob and Meryl started it, we want to grow it, and we hope the third generation can do the same.”