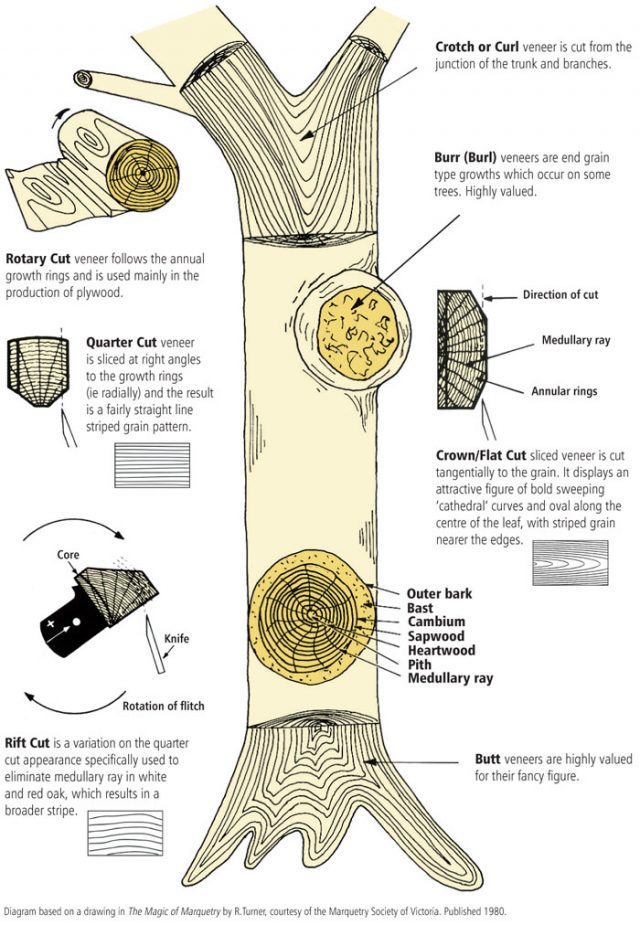 A cut above: veneer cutting methods

The saying there’s more than one way to skin a cat isn’t very nice, but it does highlight there is more than one way to go about it. The same is true for producing veneer from logs, there are a few different options for cutting it. The key choices are rotary peeling or slicing, with there being a number of ways to slice.

Rotary peeling sees the whole log mounted centrally on a lathe (a machine that rotates the log against a large ultra-sharp knife) and turned continuously. If you visualise unrolling a toilet roll, it is much the same when you rotary peel a log. This cut follows the trees annual growth rings resulting in bold, irregular markings. Rotary cut veneer is wide so it is usually cut to size and at this time any defects are removed. It is a very cost effective cutting method due to its yield.

Slicing is favoured for the production of decorative timber veneers and cuts. The most common methods are quarter and crown, however, the possibilities are only limited by the imagination.

In order to produce a quarter cut veneer the log must be cut into quarters before slicing. A quarter log is placed on a frame so that the knife meets the growth rings at a right angle. The result is veneer with stripes, which depending on the species, may or may not be straight. This slicing technique requires trees of large diameter and yields are typically lower than other production methods, meaning quarter cut veneer can be more expensive.

Crown cut (also known as flat cut or plain sliced) involves a half log being moved towards a knife in an up and down movement. The slices, referred to as leaves, are stored in sequential order as they are cut. This practice is important for matching veneers for project aesthetics. Crown cut is a widely used slicing method in veneer manufacturing and typically results in a straight grain interspersed with cathedrals patterns, also known as crowns.

Other methods of producing veneer include, half-round slicing which is a variation on rotary peeling, and rift cut, where the log is sliced on a slight angle. This method is predominately used in the slicing of Oak to minimise the appearance of a feature common to Oaks known as medullary ray.

The team here at Matilda Veneer would be happy to show you samples of veneers cut in different ways to help you understand the distinct aesthetic they bring to a project. Feel free to pop in or give us a call on 07 5594 0655.